In times of war in East the renovations and constructions of “Neelapabbatha Viharaya” considered to be built up king Kavanthissa in the second century BC were initiated by Sadaham Vijaya Foundation and abandoned for some time due to numerous barriers. It is now re-started and constructions are going on under a new name Sri Sumedhankara Vana Senasuna in memory of Most Venerable Dhambagasaare Sumedhankara Thero who pioneered to re-build up Mangala Mahaa Seeya in Seruwawila which was a mere mound when found by him because of vandalism carried out by invaders.

"Be realistic.Why were you born in this world? You study, secure a job, join a mate, marriage results in children and sacrifice the whole life for the needs of a family. Now you have grown old and decrepit and suffering from some form of disease incurable. Ultimately remorse and repentance remaining. You die of it but in the hope of being reborn. Ignorance, delusion and craving bring you back for a life of what ever kind. Is this the life of yours and mine?" All conditioned things are impermanent, When one realises this with wisdom, Then he is disgusted of sorrow, This is the path to purity. He who has reached the goal is fearless, is devoid of craving, is passionless,  has broken the thorns of existence,  This body is his last. -Gothama Buddha 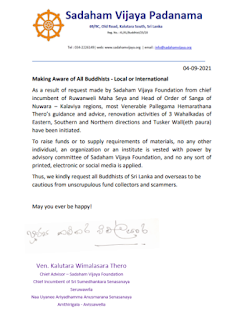 Special Notice!
All the below mentioned religious services are put into action under direct guidance of most Ven. Kalutara Wimalasara Thero. Renovation works of three frontispieces  (wahalkada) of estern, southern and northern directions of Swarnamali Maha Seya are being carried out. Security Chambers in the premises of Swarnamali Maha Seya for installing scanning eqipments (metal detectors) have been constructed. Reconstruction of Lahugala Neelagiri Maha Seya in eastern province are to be initiated in collaboration with Bodu Uruma Sanrakshana Padanama(www.heritageofbuddhism.org)  To fix a shelter for Pankuliya - Ashokaramaya in Anuradhapura is already in progress. Building up a Stupa at Palugama monastery located between Anuradhapura and Kurunegala district (nearby Hachchi Kutti Viharaya) is in progress. Renovation of ruined stupa in Nagalalanda Mahasen Senasanaya, minneriya is to be initiated. Facilitating forest bhikkus in rustic locations is being carried out. Sri Sumedhankara Vana Senasuna of S